Canoe Trip to Our Local 'Hawaiian' Island
By Christopher Roy

This past weekend was a beautiful sunny fall day, just perfect to take some friends visiting from Portland out for a kayak and canoe. We invited out friends to join us on a trip to our own Hawaiian Island, more commonly known as Russell Island, which is just a short paddle from Salt Spring Island.

The history of Russell Island and the Hawaiian people are intertwined and this connection began with the Northwest Coast fur trade. In the late 1700s, Hawaiian, or Kanaka as they are known in their language, became involved in the maritime fur trade. Sea otter pelts were being traded in Asia and, at this time, the Hawaiian Islands became a natural stopover between North America and Asia. The Kanaka became employees of the various fur trade companies, including the Hudson's Bay Company (HBC). Over time, small Hawaiian settlements began to form around HBC posts in both Canada and the United States. When the United States government began passing legislation which prevented the Kanaka people from becoming American citizens or owning land, many Kanaka people moved to Canada. By the 1870s, the Kanaka began settling in the Gulf Islands.

In 1886 William Haumea, a Kanaka settler, received a certificate of purchase and a Crown Grant for Russell Island. Haumea already had land at Eleanor Point on Salt Spring Island and was expanding to Russell Island. Although he never built a home on Russell, he was responsible for clearing fields and pasture areas as well as for establishing a large orchard and a strawberry field. In 1901, Maria Mahoi was identified in Haumea's will as the sole heir to Russell Island.

Maria Mahoi had previously lived on Salt Spring Island with her first husband Captain Abel Douglas and their seven children. In 1902, Maria moved to Russell Island with her second husband George Fisher. George Fisher was the child of a English father and a Cowichan mother. The Mahoi/Fisher family expanded with six more children. Between 1902 and 1907, a house was built on the northwest side of the island. A wharf was also built in front of the house (n.d.).

The Mahoi/Fisher family continued to build on the work begun by Haumea by maintaining the cleared land and adding to the orchard and strawberry field. Eventually, the orchard included six to eight rows of trees with eight trees in each row. George Fisher is said to have acquired some of the fruit trees from William Naukana and John Palau, fellow Kanaka settlers from Portland Island. The family also established a large vegetable garden and kept sheep, chickens and cows. Food from the sea supplemented the family diet. Some items were sold at the market and added to the family income; these items included fish, seaweed and clams as well as strawberries and vegetables. By 1932, the amount of cleared land on the island had reached its peak.

Russell Island remained in Kanaka hands until 1959 when it was sold to the Rohrers. Initially, the Rohrers stayed in the Mahoi house. However, around 1972, they began constructing a “summer home” on Russell. The intent was to use the summerhouse and, when they were away in the winter, they would have their caretakers live in the Mahoi house over the winter. This arrangement lasted until 1981. During this period, some work was done to the Mahoi house. For instance, in the late 1960s a new foundation was put on the house. 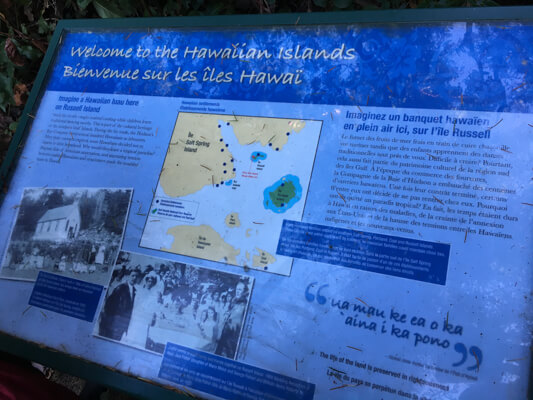 In 1982, the daughter of the Rohrers – Judith and her husband Richard Anderson – became actively involved in Russell Island. They lived in the summerhouse while they made renovations to the Mahoi house. Their plan was to live in the Mahoi house over the winter. For the next ten years they made changes to the Mahoi house. These changes included altering the floor plan of the first floor and stabilizing the second floor with beams. (Commonwealth Historic Resource Management Ltd. 2004) The Anderson's sold the property to the Pacific Marine Heritage Legacy in 1997. The island has subsequently become part of Gulf Islands National Park Reserve (GINPR).

In 2009, Gulf Islands National Park Reserve initiated a new volunteer host program at Russell Island in collaboration with the descendents of Maria Mahoi. Through a volunteer agreement with the park reserve, the Mahoi descendents share their family stories about life on Russell Island with visitors. Their personal connection to the island adds a particular authenticity to the interpretation of the island's history. The hosts are on site at the homestead location during the summer season in July and August and are available to the public in the afternoons and early evenings on most days.

We even spotted some Orcas while walking the trails of the island.